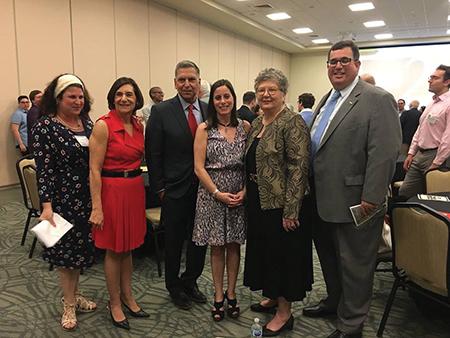 Towson Hillel welcomed 100 community members May 3 for its annual meeting, which capped off a year of celebrating 20 years at Towson University. The event featured awards, the installation of new Hillel board members, a slideshow retrospective and addresses from Kim Schatzel, president of Towson University, and Linda Hurwitz, chair of the board of The Associated: Jewish Community Federation of Baltimore, among others.

While the evening maintained its celebratory nature, the news of an alleged anti-Semitic attack on Jewish Towson University students just four days prior could not be avoided.

The students, who are members of the historically Jewish fraternity Alpha Epsilon Pi, were walking home from downtown Towson early Sunday morning when two male suspects began following them near Aigburth and York roads and began shouting anti-Semitic slurs and epithets at them. One victim was punched in the face. The university is investigating the alleged assault as an incident of “hate-bias.”

Schatzel went on to say that even more deplorable was the fact that fellow TU students reportedly perpetrated the alleged assault. “Outrage and sadness,” she noted, is shared not only by The Associated and Towson Hillel, but by TU’s entire leadership team.

Schatzel said she met with the three “remarkable, poised and accomplished” AEPi brothers the day before the year-end celebration. The students told Schatzel that although they came to TU because it is a university that supports Jewish culture and student life, they no longer feel safe after the Sunday-morning attack.

“We pledged to double down — and work harder — to make sure that bias, hatred and violence against individuals never rears its ugly head again on TU’s campus,” she said.

In Hurwitz’s address, she spoke of the international rise in anti-Semitism and anti- Israel actions.

“This week’s unfortunate news is just a reminder of the harsh reality facing the Jewish community,” she said. “So sad that in these modern times, we are seeing a rise in anti-Semitism and that college campuses are often the target for this hatred.”

Like Schatzel, Hurwitz demanded that the Jewish community, the TU leadership and student body rally together to promote tolerance, learning and kindness.

After the event, Towson Hillel executive director Lisa Bodziner said that while the incident from Sunday morning was “truly frightening and tragic,” Jewish people always come together when faced with adversity.

“There was really a tone of that — that we persevere and we fight. We still have a lot of work to do for making our presence on campus visible and embraced.”